Cookie preferences
This website uses cookies, which are necessary for the technical operation of the website and are always set. Other cookies, which increase the comfort when using this website, are used for direct advertising or to facilitate interaction with other websites and social networks, are only set with your consent.
Configuration
Technically required
These cookies are necessary for the basic functions of the shop.
"Allow all cookies" cookie
"Decline all cookies" cookie
CSRF token
Cookie preferences
Currency change
Customer recognition
Customer-specific caching
Individual prices
Selected shop
Session
Comfort functions
These cookies are used to make the shopping experience even more appealing, for example for the recognition of the visitor.
Wish list
Statistics & Tracking
Affiliate program
Google Analytics
Track device being used
Categories
Information
Close filters

GOK shares in donation for children 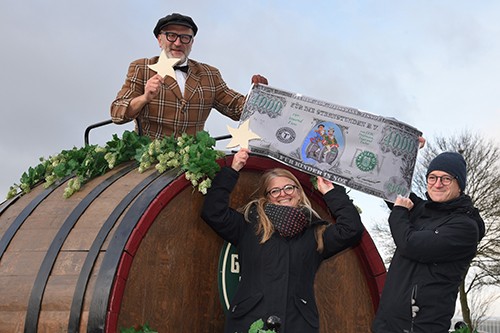 It all started with a campaign by the cabaret artists Volker Heißmann and Oliver Tissot. To mark the first freight transport on rails 185 years ago, the two jokers coached two barrels of beer from Fürth to Nuremberg.

After the trip, both Volker Heißmann and Oliver Tissot auctioned off one performance each to the highest bidder. 100 per cent of the proceeds were donated to the non-profit organisation "Sternstunden" - a charity campaign of the Bavarian Broadcasting Corporation.

During this campaign, the private brewery Tucher also made a donation. And last but not least, GOK joined in. Oliver Tissot spoke about the donation cooperation during the preparations for the online Christmas celebration, and within a few minutes the GOK General Management agreed to increase the donation amount by another 1,000 euros.

The picture shows Oliver Tissot and Andreas Brohm (GOK, on the right) handing over the donation to “Sternstunden”.

GOK is extremely glad to have been part of this great campaign and certainly even more to be able to support an organisation that is fully committed to the welfare of children. A family-owned company like GOK is, of course, particularly caring about such issues.

Here you will find the official news of the “’Sternstunden” team: https://www.sternstunden.de/alle-meldungen/2021/dezember/ins-bier-ration-fuer-sternstunden.html

Starting at 07:52 you will find a small feature about handing over the donation:

Back to overview
© 2022 GOK Regler- und Armaturen-Gesellschaft mbH & Co. KG
This website uses cookies, which are necessary for the technical operation of the website and are always set. Other cookies, which increase the usability of this website, serve for direct advertising or simplify interaction with other websites and social networks, will only be used with your consent. More information
Decline Accept all Configure