Cookie preferences
This website uses cookies, which are necessary for the technical operation of the website and are always set. Other cookies, which increase the comfort when using this website, are used for direct advertising or to facilitate interaction with other websites and social networks, are only set with your consent.
Configuration
Technically required
These cookies are necessary for the basic functions of the shop.
"Allow all cookies" cookie
"Decline all cookies" cookie
CSRF token
Cookie preferences
Currency change
Customer recognition
Customer-specific caching
Individual prices
Selected shop
Session
Comfort functions
These cookies are used to make the shopping experience even more appealing, for example for the recognition of the visitor.
Wish list
Statistics & Tracking
Affiliate program
Google Analytics
Track device being used
Categories
Information
Close filters 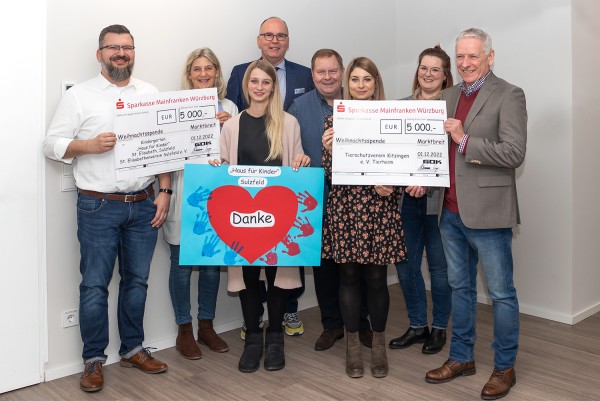 GOK donates 5,000 euros each to the Tierschutzverein Kitzingen e.V. and the “Haus der Kinder” St. Elisabeth kindergarten in Sulzfeld.

GOK company owner Dieter Kleine, his daughter and authorised signatory Evelyn Kleine as well as Managing Director Gerald Unger handed over the symbolic donation cheques to the recipients during a ceremony. In his speech, Gerald Unger pointed out that it was part of the company’s philosophy to do good in its own region, on one’s doorstep, as it were. Therefore, many years ago, it became customary not to send Christmas presents to business partners, but to donate the money to charitable causes in the home region. Over the years, the donations have grown to an impressive 250,000 euros.

Such donations naturally come in very useful everywhere, especially in turbulent times like these. This is also the case at the animal protection association in Kitzingen, as the old animal rescue is dilapidated and has no future. In addition, the two chairpersons Sharon Hawkins and Dieter Model expect that many animals will inevitably end up with them in the coming months. Life is becoming much more expensive overall, so some people may no longer be able to afford their pets. The 5,000 euros donation for the new building therefore comes just at the right time.

The kindergarten in Sulzfeld has also already earmarked the donation of 5,000 euros. The large park-like area available to the facility is “both a curse and a blessing”, said director Alexandra Pfennig. Basically, it’s great for the children, but also incredibly intensive in terms of maintenance. She has been able to watch the gradual decay of the parasols, now at least 25 years old, year after year. Therefore, the donation will be used to purchase new, large-scale shading, reported Peter Laschimke, 1st chairperson of the kindergarten’s supporting association.

Gerald Unger emphasised that GOK’s donation activities were never intended as a one-off “PR gimmick”, but had always been aimed at strengthening the home region. In any case, thinking of others is part of GOK’s corporate DNA and its self-image as a social employer. In addition, he said, it was his candid hope to inspire others to do the same.

Back to overview
© 2023 GOK Regler- und Armaturen-Gesellschaft mbH & Co. KG
This website uses cookies, which are necessary for the technical operation of the website and are always set. Other cookies, which increase the usability of this website, serve for direct advertising or simplify interaction with other websites and social networks, will only be used with your consent. More information
Decline Accept all Configure